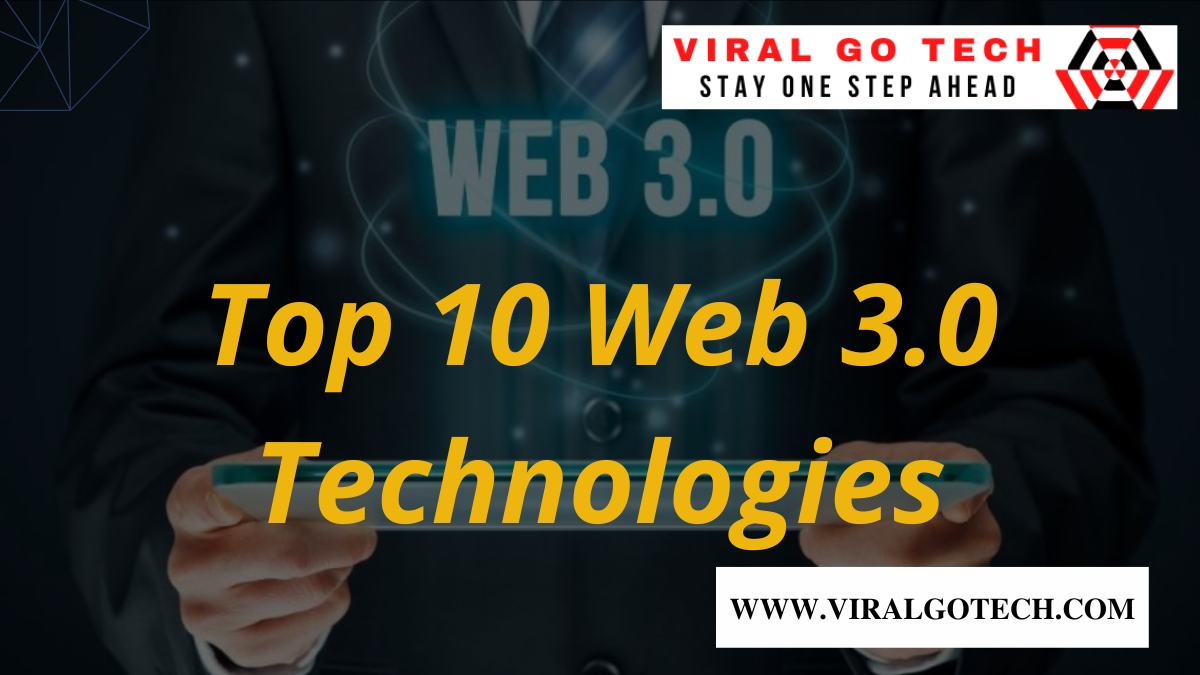 Top 10 Web 3.0 Technologies, If you’re new to the world of web technology, it can be a little confusing. New terms and phrases pop up all the time and it can be hard to keep up with what’s new. This article will take you through some of the most popular web 3.0 technologies.

The technologies that makeup Web 3.0

Web 3.0 is a term that is used to describe a new decentralized web, where users and businesses can create value and where the users have control of their data. The technologies that makeup Web 3.0 are based on the technologies that have made up Web 1.0, which was the first generation of the World Wide Web, and Web 2.0, which is the second generation. The Web 3.0 technologies are a combination of peer-to-peer networks, decentralized databases, and distributed hash tables, which are all combined to make a decentralized web that has a trustless environment where users control their data and experience.

Web 3.0 (Web3) is the next generation of the Internet, the new frontier for Blockchain. Web3 is a decentralized platform that runs on a peer-to-peer network and uses a consensus mechanism to make sure everything works seamlessly.

The next generation of the internet will make it possible for people to own their data and store it in a decentralized manner. The new web will be a place where individuals can exchange information without the need for a central authority or company. It will be a place where people will be able to control their own digital identity and where they will be able to interact with other people and with machines.

Decentralized technologies could become the standard for the way we exchange data and the way we interact with one another and with machines. The new internet allows for more transparency, more information, and more possibilities for people. To understand Web 3.0 and the new internet, think of the way the internet works today.

Think of the servers, the cables, the data centers, and the companies that control all of this. Web 3.0 is the next generation of the Internet, the new frontier for Blockchain.

Web 3.0 will be more distributed than Web 2.0, but there are many challenges that developers will face when building decentralized applications. One of the biggest challenges is achieving consensus on the state of the distributed database.

The Internet of Things

The Internet of Things (IoT) refers to the billions of devices that are connected to the Internet. This includes everything from your smartphone to your smart refrigerator. The Internet of things connects everything by using an internet protocol, allowing these smart devices to communicate with each other and with you.

This includes everything from your smartphone to your smart refrigerator. The Internet of things connects everything by using an internet protocol, allowing these smart devices to communicate with each other and with you.

Crowdsourcing is a type of distributed problem-solving and product design, which is done by outsourcing to the undefined public through an open call calls.

Crowdsourcing relies on the collective intelligence of the masses to solve problems and test ideas. It is the opposite of traditional top-down management, and it is a form of social sourcing.

It can be applied to many spheres, but it is especially useful in situations where the task is too big for a small team to handle or where additional expertise is needed.

Web 3.0 is a term used to describe the third generation of the World Wide Web and the technologies that help support it. Web 3.0 is characterized by a series of web applications that will help to improve collaboration, communication, and security.

Collaboration is a vital component of communication and necessary for the success of any team. The beauty of Web 3.0 is its ability to help facilitate the collaboration process and make it more efficient.

With Web 3.0, it is possible to create a virtual workplace that will connect people across the world.

Machine learning is a method of getting computers to act without being explicitly programmed. This is all done by giving the computer access to information, then it can learn to perform a series of tasks (classification, predictions, etc.) based on the data it has received.

With the release of Apple’s ARKit and Google’s ARCore, the world of Augmented Reality (AR) is about to change forever. AR (or Augmented Reality) is a technology that allows for the layering of virtual elements on top of the real world. For example, this can be used to create new experiences for things like gaming or shopping.

How does this technology work? If you’ve ever played Pokémon Go or seen Snapchat’s face filters, then you’ve already seen AR in action. By using the camera on a mobile device like your phone, AR overlays virtual objects onto the real world.

AR has been used in a wide range of industries, including military, retail, and medicine. In addition to mobile devices, AR has also been implemented on devices like smart glasses and headsets.

Apple’s new ARKit and Google’s ARCore have opened the door for new types of AR applications to be built on the web. One of the biggest challenges in creating web-based AR is getting the real-time camera video into the browser.

However, the introduction of ARKit and ARCore has made it possible to use the device’s camera to create a realistic AR experience in the browser.

Natural language processing (NLP) is a branch of computer science and artificial intelligence concerned with the interactions between computers and human (natural) languages, in particular how to program computers to process and produce language.

NLP is related to computational linguistics and is often used to create systems that allow humans to communicate with computers and process human language data.

To develop a decentralized platform, we will need to define the protocols on which it will run. Web 3.0 is being developed using the Ethereum blockchain, and we need to understand how it is going to work with other devices in IoT and how those interactions will work.

To make the platform work, we will need to define protocols for IoT devices to interact with the platform, and we need to make sure that these protocols are secure.

2 thoughts on “A-List of Top 10 Web 3.0 Technologies and a Brief Overview of Each Technology”