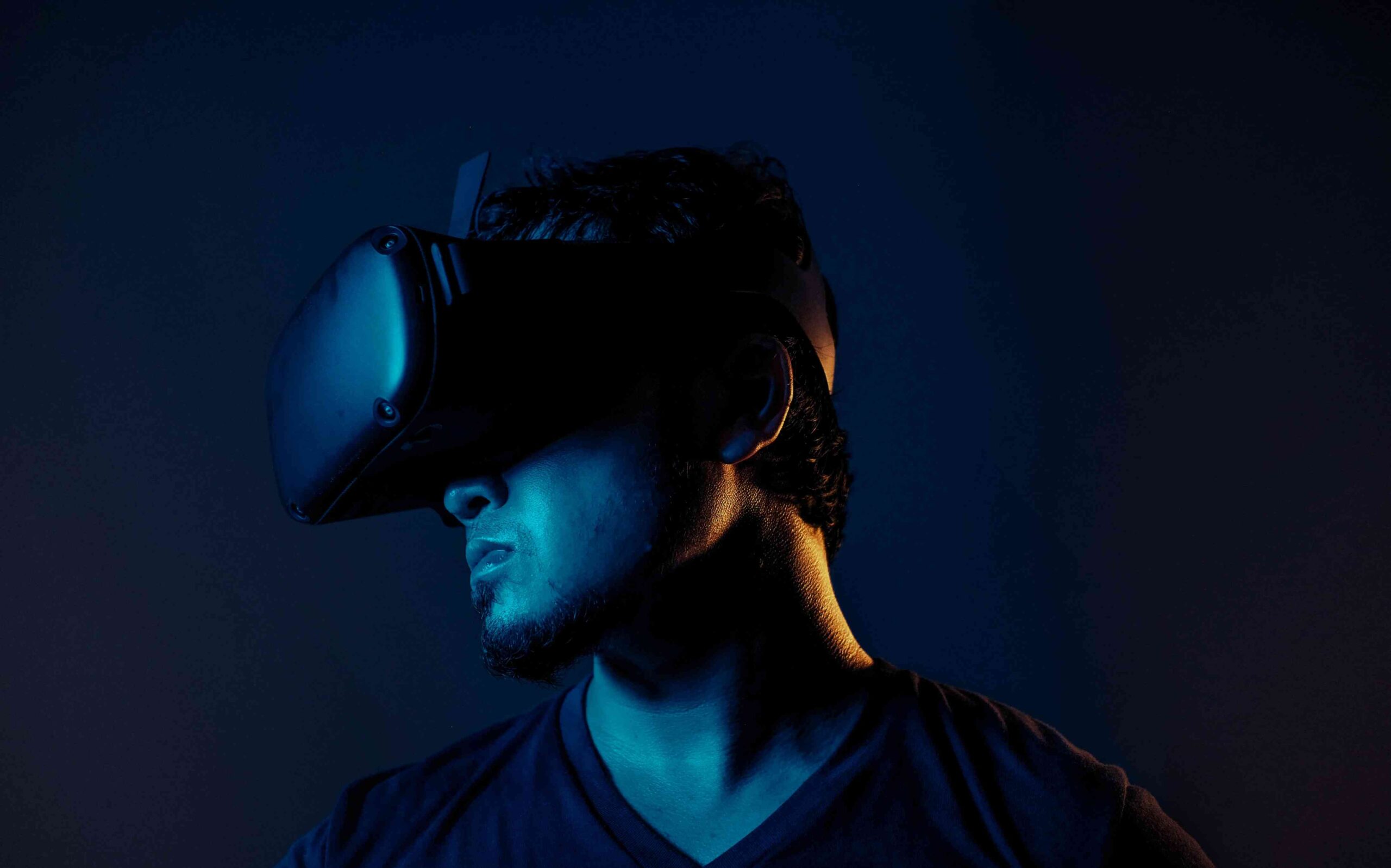 What is Virtual Reality?

Virtual reality is a computer-generated simulation of a three-dimensional environment or a person’s physical presence in this environment, that can be interacted with in a seemingly real or physical way. Virtual reality can be used to simulate experiences like a first-person view of a real-world environment or to create an imaginary world, which can be similar to the real world or very different. Applications of virtual reality can include entertainment (i.e. video games or immersive cinema), education, architecture, simulation and training, and design.

Understanding the different aspects of VR.

Virtual reality is a new way of interacting with the environment and the creation of places and objects that do not exist in the physical world. At first, it was limited to video games and movies, but now, thanks to the rapid development of technology, it has become a part of our daily life. From mobile phones to games and 3D movies, virtual reality is now available to everyone.

How VR will change the shopping in near future?

The market is mainly driven by the rising demand for gaming and entertainment applications. Talking about the recent trends, the rising popularity of Virtual Reality headsets, such as Oculus Rift, HTC Vive, and Sony PlayStation VR, has triggered the growth of the global Virtual Reality market.

Developed by a team of passionate gamers, engineers, and designers, Rift is built upon the latest technology and simplest input methods to create an immersive, comfortable, and fully-interactive VR experience that allows you to step inside your favorite games and virtual worlds. Touch is the primary interaction method, using your controller to point, select, and manipulate objects and UI.

The HTC Vive is the world’s first room-scale VR system. Room-scale VR lets you move around and explore a virtual space, so you can interact with virtual environments just as you would with physical environments.

The HTC Vive delivers on the promise of VR with game-changing technology and best-in-class content. Vive’s room-scale VR puts you into the game, transporting you to fantastical places where you can see, hear and interact with everything around you.

Samsung’s Gear VR is a virtual reality device that’s powered by your phone. It transforms a Galaxy smartphone into a portable, wireless VR experience. There are no wires or cables needed, so you can enjoy truly immersive VR experiences anytime, anywhere.

With the Gear VR, you can explore a variety of VR titles in the Oculus Store including 360-degree videos, 3D movies, and made-for-VR games. In addition, you can use the Gear VR to play games from your Galaxy smartphone and take calls and respond to text messages.

The future of virtual reality in the next 5 years.

Virtual reality is one of the most exciting things we can look forward to in the next few years. It’s a big buzzword and companies want in on the action. Many of us have already seen the potential of VR and are already excited about what the future holds. Virtual reality is everywhere.

Facebook, which bought Oculus for $2 billion, is busy developing its own virtual reality hardware called Oculus Rift. However, that is not the only company making a name for themselves in the world of VR. Sony, Samsung, Google, and Microsoft are all working on their versions of a VR headset.

The future of Virtual Reality in the coming 10 years.

VR is a technology that combines computer technology, advanced software algorithms, and engineering to create computer-generated environments that can simulate physical presence in places in the real world or imagined worlds, as well as to generate sensory experiences, which are generally visual, auditory or tactile. VR is used in a variety of applications, including video games, film, social media, art, 3D printing, and military, law enforcement, and medicine.

Today, it’s pretty common to see a VR headset (or a VR-like headset) being used for gaming. There are hundreds of VR games out there. According to the market data from Statista, the VR games market is expected to grow from more than $3B in 2017 to more than $38B in 2022. Market researchers predict the average annual growth rate of the market to be around 59.9% between 2017 and 2022.

Will virtual reality replace travel virtual travel and the future of tourism?

There is no doubt that virtual reality (VR) is becoming increasingly realistic and immersive. And as VR technology continues to develop, it is not difficult to imagine a future where VR replaces travel altogether. After all, why bother spending money on airfare and accommodation when you can simply put on a VR headset and explore the world from the comfort of your own home?

There are many potential benefits of this. For one, it would be much more affordable to travel virtually than it is to travel in real life. And since you wouldn’t need to physically travel to your destination, there would be no need to worry about things like jet lag or missed flights. You could also easily visit multiple destinations in a single day, something that would be impossible to do if you were actually travelling.

Of course, there are also some drawbacks to this potential future. For one, VR can never completely replicate the experience of being in a real place. And while VR technology is becoming more and more realistic, it is still not perfect. There is also the risk that VR could become so realistic that it starts to replace real-life social interactions. After all, why go out and meet new people when you can just put on a VR headset and interact with people from all over the world from the comfort of your own home?

Only time will tell if VR will completely replace travel. But as VR technology continues to develop, it is not difficult to imagine a future where VR is the primary way that people experience the world.

Virtual reality (VR) is a hot topic for the real estate industry. But what is it? And where is it going? So, what is VR? VR is the ability to create a realistic experience in which you can interact with a computer-generated environment. It’s a 3-D world that simulates reality. It uses several devices, such as game consoles, smartphones, and virtual reality headsets to produce this experience.

VR is just starting to take off in the real estate industry. It’s mostly seen in marketing materials, such as virtual tours of a property. It’s a way to give customers a sense of what they’re buying before they even make it out to the open house.

VR is also used to sell homes. A major selling point of VR is how it can make the process of buying a house or renting an apartment a little less stressful. It allows customers to see what they’re getting without even having to leave the house. It’s a great way to sell a home or apartment without having to go back and forth with the customer.

The magic of Virtual Reality

VR is a technology that is coming out of the gaming and entertainment industry and is starting to be used in other industries such as real estate, medical, and government. It’s a technology that is sure to change the way we interact with the world, but how does it work and what can it offer to the world? We’ll take a look at what VR is, how it works, the applications it has, and how it is changing the world.

Looking at the past of Virtual Reality

VR has been around for decades, it’s been in the video game industry for more than a decade and now, it’s here. There has been some pretty awesome tech to come out of the past several years, but nothing has been as exciting as the prospect of virtual reality.

Virtual reality (VR) is an experience that is created using software and presented to the user in a way that emulates the real world. In a virtual world, you can manipulate items just as you would in the real world. This means that, unlike with augmented reality, you can use your hands to touch and manipulate objects.

Virtual reality (VR) is the experience of a simulated environment that can be interacted with in a seemingly physical way by a person using special electronic equipment, such as a VR head-mounted display. VR artificially creates sensory experience, which can include sight, touch, hearing, and smell.  VR creates a virtual world where the user feels as if he is immersed in another world.

There’s no doubt that virtual reality gaming is here to stay. The immersive experience that it offers is unlike anything else out there. And with the technology continuing to evolve, the future of VR gaming is looking very bright.

One of the key things that will help to propel VR gaming forward is the adoption of 5G. With 5G networks being rolled out around the world, VR gamers will be able to enjoy even higher quality visuals and smoother gameplay.

Another big trend that we’re seeing in the world of VR gaming is the rise of location-based entertainment. Places like Dave & Busters and VR arcades are popping up all over the place, and they’re proving to be very popular. This is a great way for people to try out VR gaming without having to make a big investment.

And finally, we’re also seeing a lot of development in the area of social VR gaming. This is where gamers can interact with each other in a virtual world. We’re already seeing some great examples of this with games like Rec Room and AltspaceVR.

So, what does the future hold for VR gaming? It’s looking very bright indeed! With 5G, location-based entertainment, and social VR gaming on the rise, there’s no doubt that VR gaming is here to stay.

Virtual Reality is still a young technology and it is exciting to see how it has already been used in our everyday lives. We have seen it be used in schools to teach students about different topics and even used for real estate tours. We believe that the future of VR is still wide open. We look forward to seeing what the future holds for this innovative technology.

2 thoughts on “What is the Future of Virtual Reality”